FISITA World Congress 2021 takes place at the O2 universum, which opens in summer 2019 - the venue will serve as a modern multifunctional centre, hosting large international congresses and corporate events. The largest hall with a capacity of up to 4,500 people will also be used as a venue for medium-sized concerts and sports matches.

The complex is situated in the north-eastern part of the city centre. It occupies an advantageous position between the interior road ring, which provides comfortable transport options, and the external ring road, which allows a quick connection to the outgoing motorway and the international highway network.

Location
The complex is situated in north-eastern part of the city centre. It occupies an advantageous position between the interior road ring, which provides comfortable transport possibilities, and the external ring road, which allows a quick connection to the outgoing motorway and the international highway network.

O₂ universum is reachable within 30 minutes from Václav Havel Airport and 10 minutes from the city centre. Easy to access by public transport:

Prague, in Czech – Praha, is the capital and largest city of the Czech Republic and fourteenth-largest city in the European Union. It is also the historical capital of Bohemia proper. Situated in the north-west of the country on the Vltava river, the city is home to about 1.3 million people, while its metropolitan area is estimated to have a population of nearly 2 million. The city has a temperate oceanic climate with warm summers and chilly winters.

Prague has 1,300,000 inhabitants and stretches over approximately 500 square kilometres. The dominant feature of the city is Prague Castle, which houses the gothic St. Vitus’s Cathedral. The castle had been the seat of Czech kings since 1087, until 1918 when it became the seat of presidents of the Czechoslovak Republic, and since 1993 it has been the seat of the president of the Czech Republic. Prague has one of the oldest universities in Europe: Charles University, which was founded in 1348.

In 1993, the city’s historic centre was rightfully added to the UNESCO List of World Cultural Heritage. For lovers of historical monuments, Prague is, literally, a paradise. The grand Baroque palaces of the Hradčany quarter join forces to form a monumental gateway to Prague Castle, with its magnificent Gothic cathedral consecrated to St Vitus. The Lesser Quarter boasts a profusion of intimate corners and pleasant restaurants; fine burghers houses blend with splendid aristocratic palaces and charming gardens here.

The Old Town of Prague offers its visitors a network of twisting medieval lanes and the Old Town Square. When exploring the remains of the former Jewish town, its synagogues, the Old Jewish Cemetery or the extensive collections of the Jewish Museum (one of the most valuable to be found in Europe), you are certain to experience a mysterious spiritual atmosphere. The Charles Bridge, the most beautiful promenade site in Prague, is alive with street artists and musicians.

The climate is influenced by a mixture of ocean and continental factors.

September weather in Prague can be quite pleasant but it is still unpredictable with maximum day temperatures around 16-22°C/65-75°F, minimum night temperatures around 7-10°C and somewhat humid. Sudden showers and thunderstorms are common, so bring an umbrella or be prepared to dash for cover.

You can find the current weather at www.weather.com

All foreign visitors to the Czech Republic must possess a passport, valid for at least the next three months. Participants requiring a visa should apply in advance to consular offices of the Czech Republic or diplomatic missions in their countries in order to avoid delay in travel to the Congress.

The official language for the FISITA World Congress will be English. Interpreting is not provided.

The organizers do not accept responsibility for individual medical, travel or personal insurance. All participants are strongly advised to take out their own personal insurance before travelling to the FISITA World Congress.

Czech crown (CZK) is the official currency of the Czech Republic. Exchange of foreign currency is available at Prague international Airport and at most hotels, banks and exchange offices throughout the city. International credit cards are accepted for payments in hotels, restaurants and shops. Payment in cash in EUR is also available in some restaurants and shops, please ask for details on-site. You can find the official exchange rates on the website of the Czech National Bank at www.cnb.cz.

The Czech Republic uses a 230 volt 50 Hz system. Sockets follow the standard used also in France, Belgium, Denmark, Poland, Greece, Italy, Ireland and some other countries, and have a grounding pin sticking out of the power socket. Information for proficients: type E socket.

The Czech Republic is on Central European Time – Greenwich Mean Time (GMT) plus 1 hour. From April to October is summertime, i.e. GMT + 2 hours.

Service is usually included in the bill in bars and restaurants but tips are welcome. If you consider the service good enough to warrant a tip, we suggest about 10%.

Complete information is available at the official website of the Czech Republic at www.czech.cz

The public transport infrastructure consists of a highly-used integrated transport system of Prague Metro (its length is 59 km with 57 stations in total), Prague Tram System (including the "nostalgic tram" no. 91), buses, the Petřín funicular to Petřín Hill, and six ferrit. Prague has one of the highest rates of public transport usage in the world with 1.2 billion passenger journeys per annum.

The Václav Havel Airport Prague handles flights from most European carriers and also some overseas flights. It is located 30-45 minutes by car from the centre of Prague. There is a good connection between the airport and the city centre by public transport buses and taxis

Unfortunately, there is no subway or train connection to the city from the airport. You should buy a ticket before travelling and these can be found at the arrival hall, at ticket machines or at the newsagents (if arriving late and all shops are closed buy a ticket from the driver but large banknotes are not accepted). 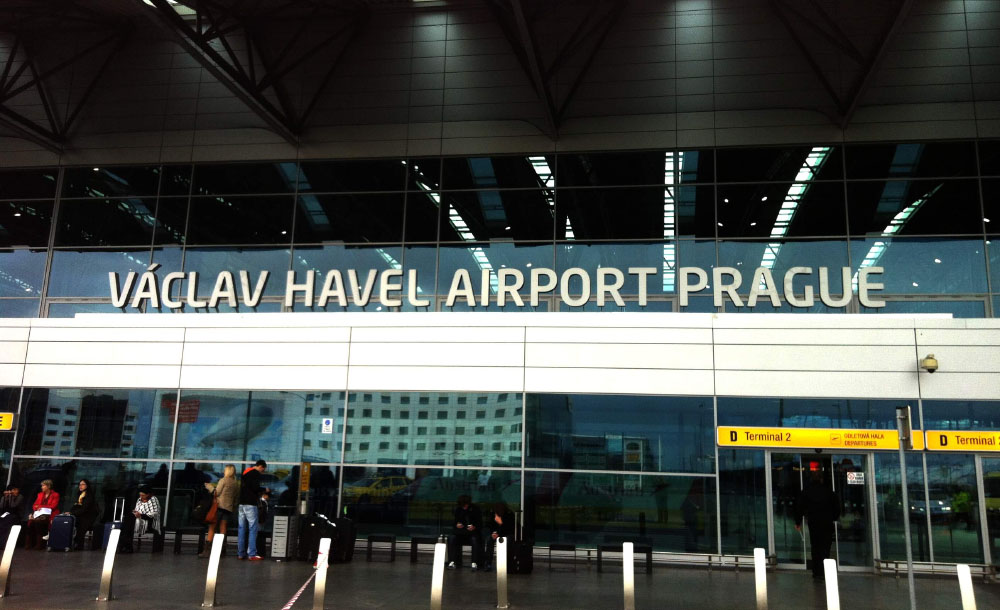 The daytime and night-time operation of buses is similar to tram operation. Night-time service is provided by bus numbers 501 to 515. Bus schedules are located at individual stops.

Travelling by city transport is possible with a valid ticket only. Passengers have to obtain their tickets before boarding the vehicle or entering the Metro system. The ticket is valid only if marked in the validation appliance.

One-day (24-hour) ticket: 110 CZK (children 55 CZK)
3-day (72-hour) ticket: 310 CZK (not available for children)
The one-day and three-day tickets are valid for all the city transport facilities and allow transfers. On such a ticket, owner's name and the date of birth have to be filled in. The ticket is valid from the moment of its marking. These tickets can be bought in the Information Centres of the Prague Information Service (PIS).

When taking a taxi, make sure the taxi is equipped with a permanently installed yellow roof lamp with the TAXI sign in black letters. The registration number, company name and price list including the base rate, the rate per kilometre and one-minute-waiting rate must be displayed on both front doors of the cab. These prices must correspond with the prices set on the meter in the cab. Customers are recommended to order a taxi with non-stop dispatching offices where the information on fares is available in advance.

Please use one of the recommended companies (operators speak English):